I need to clarify what happened at Robb elementary school after a news conference today about the whole episode with the school shooting. We came to find out today that the shooter walked into the school and was not confronted by anybody. No police officers were present at the school, and the shooter made his way to the classroom and barricaded himself inside the room with a lot of children and two teachers. It also appears that he was left alone for approximately 1 hour and was able to kill all 19 students and both teachers while the children and teachers had no hope of help while all the officers were waiting outside of the classroom waiting for a swat team. These police officers didn’t go to where the gunman was shooting up the inside of that room. 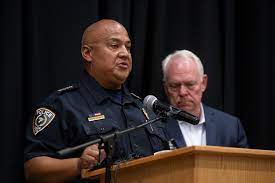 After the elections we just had and what is taking place the democrats are being overwhelmed with losses. More specifically, the Republicans are outvoting the Democrats at a 4-1 ratio. While much of this discrepancy shows that the GOP races are usually more contested in general, the fact that there is this much turnout for the Republicans, conversely to the sparse turnout for the Democrats doesn’t bode well for the current party in charge. There is a new Gallup pole which shows Americans are sick of our president, vice president, and the complete administration and cabinet, along with the Democrat-controlled House and Senate. The polls shows approximately 83% of America is dissatisfied with the direction we are headed and only 16% are satisfied as shown on Fox News, with only one percent not showing an opinion either way. The problem for the Democrats is it is almost impossible for a power hungry person like President Biden to step aside for the good of the party. On a related note, my documentation is almost complete for setting up my campaign for 2024 for President of the United States.