Former president Donald Trump had a lot of leadership abilities in many venues. He is a phenomenal businessman, most notably with construction in New York City and around the country. This transitioned effectively to an overly-successful presidency with his leadership attributes across the board, whether it comes to legal assignments, energy independence, and even a resurgence in America First pop culture. 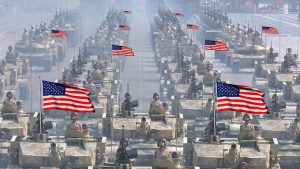 But his foremost leadership comes with how he handles diplomacy along with the military. It is important to be diplomatic, but in order to have the maximum leverage and ability to firmly stabilize the American position, one needs to know how to use the military in a strong, assertive, but not aggressive manner. This is where Donald Trump has succeeded as much as any peacetime president.

It first starts with the military personnel. He must have the officer corps to instill leadership among all the men and women. He must have the backing of the American people to use the military in a responsible manner. And finally, he must equip the military with the best equipment in the world, and to maintain this superiority at all times. Only then can a president have the wherewithal to interject a diplomatic effort, whether it be maintaining peace in Europe and Asia, as well as instigating new peace efforts throughout the Middle East.

Having said that, President Putin of Russia would never have started the war with Ukraine; indeed, with President Obama, he had attacked and took over Crimea, which highlights how Trump dealt with other countries. China was starting to feel the pressure of its own military expansion during the Trump era, and had no realistic opportunity to take over Hong Kong or even invade Taiwan, of which it has accomplished the former and may very well attempt the latter, most probably before the American midterm elections.

But back to the here and now. Ukrainian President Volodymyr Zelensky wants the upgraded missiles that American can provide. It has been reported that if they had 80 of either the MRL or the M270’s, they would easily push back Russian advances. In fact, it has been reported that they could even retake both Mariposol and Crimea, though the Duran military analysis doesn’t quite have the same assessment.

Still, American generals have opined that the war would be over and Ukraine would have all their land back in the matter of a month. They would then have to deal with the citizenry of both Mariposol and the Donbass region (as well as, to a certain extent, Crimea), who actually would prefer Russian citizenship for the most part, but the original agreement after the breakup of the Soviet Union was for Russia to give up that land.

The point, though is not how much more militarily powerful either Russia or Ukraine happens to be. Russia committed a violation  against another nation by invading it without proper talks with the leadership for negotiations about the land. With Donald Trump, THAT negotiation would have happened far more likely that a Russian invasion, and now we must pay the price of such a disaster in the White House. President Biden has no standing with the world, he has little standing with his own military, and he certainly has no standing to dictate any terms favorable to American and Western interests.