Preface: Mohammed bin Salman Al Saud, the Crown Prince of Saudi Arabia, is second in power below only that of his father, (King) Salman of Saudi Arabia. At 36, his is almost 50 years younger than his father. Back in 2017, the Crown Prince became both politically and personally close friends, particularly in the direction they wanted to take peace efforts in the Middle East. and is only leader above him is the King. There is an old adage: When important people become friends, and they incur wrath from the same enemies, they become almost like blood brothers. It’s my opinion that Trump, the King, and the Crown Prince became friends not just because of their efforts to stop Iranian aggression in the region, but also to stop the terrorist groups who were wreaking havoc both in the Middle East and worldwide. These groups, mostly based in Yemen, Syria, Palestine occupation territory in Israel, and Isis, along with different subgroups, are all or partially supported by Iran who has pledged to wipe out Israel and as much of the Western world as possible. Americans will not stand for that. 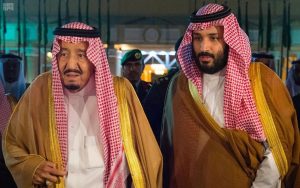 Back on topic: President Biden has made it known today that he is planning to go to Saudi Arabia. As he is the biggest enemy of former president Trump, the Saudis also consider him their enemy based on the friendship they cultivated in 2017. While political realities usually allow politicians “wiggle room” to partially or even fully denounce their former affiliations with individuals or groups, I believe that the bond that the Crown Prince had with Trump, and in extension all of Trump’s supporters, solidified Saudi Arabia’s animus toward current President Biden and his administration. Now Biden will have to get on his knees  to beg for the Crown Prince and the King to open up their output of oil so the United States can get out of this terrible oil shortage, caused by the Biden Administration, along with all of its acolytes. Remember, Biden’s first action as president was to cancel the Keystone Pipeline, which would have greatly enhanced the United States then-world leadership position in energy production, and has since put out edict after edict that has resulted in America’s worst energy crisis in history. We now  have gasoline prices setting new record highs on a daily basis, and just this past week one station has surpassed $10 per gallon in Mendocino. While currently an outlier, this price point has caused many people to start waking out of their reverie that we have a major problem being instigated by the leader of my once-great Democratic Party, President Joe Biden.

Their meeting between the Crown Prince and our President will be next month. I don’t see any outcome other than a huge NO! to Biden’s request to lower OPEC pricing on gas to help with America’s energy crisis. People aren’t that stupid anymore to realize what the real goal is here, which is to price gasoline out of range for many people and to harm economic industries. It’s really that simple.