Just filled the car today, and for the first time I paid over $6 per gallon in California, which is about the state average. Nationally, the average price of gasoline reached $5.01 per gallon, the first time the $5 figure was reached in US history. Incredibly, he is blaming the oil companies for massive profiteering and self-imposed shutdowns, but this makes no sense, as Biden’s actions since he came into office was to burden the oil industry with regulations, production bans, and pipeline closures. In addition, inflation has greatly added to the cost of fuel, and we haven’t even hit the peak of summer heat. In particular, natural gas, a relatively inexpensive yet very environment-friendly form of energy mainly used in residential and industrial-grade facilities, has been curtailed by the government, with exports completely stopped, and the ability to refine the gas regulated out of profitability. 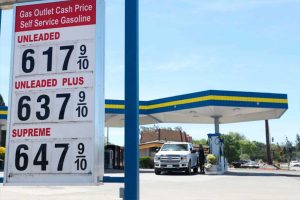 President Biden and former Secretary of State John Kerry have taken over the energy of our country, with Kerry handling most of the protocols of Biden’s “energy” policy. To be honest, there are so many mistakes that have been made, that one wonders if this actually is NOT a mistake, but a predetermined method to reduce energy for the average American. While conspiracy theories have abounded from the Bilderberg Group to the World Economic Forum issuing orders to President Biden how to shut down energy in the country by making it unaffordable and regulating it out of business, it is enough that overt bad policies will not be tolerated by most people. Remember, both John Kerry and President Biden have sons who were involved with Ukraine through their state-run gas company Burisma. Kerry, though, pulled out of it as soon as the heat started, leaving Biden’s son Hunter with a lot of incriminating evidence that so far the Justice Department is unwilling to investigate.

Meanwhile, John Kerry flies all around the world, based in his mansions and large, gas-guzzling cars and private jets, talking about global warming and climate change, while oil-based energy is being severely curtailed worldwide. China and Russia just keep producing CO2 with their coal fire plants but America just sits and doesn’t produce oil because Kerry wants to make it look like he is important but he is just a pawn being used, chewed up, and spit out by China. In my opinion, these two guys are betraying the good citizens of the United States while all of us pay over 5 dollars for a gallon of gas. President Biden needs to be removed from office.