Honesty is to a persons core beliefs and is one of the vital lessons that parents need to teach their children. Former President Bill Clinton and his wife Hillary are two such individuals who never received that particular lesson when it applies to their interaction with normal Americans. We all remember Bill’s indiscretion with a girl less than half his age, an intern who had sex with him in the oral office, of course married to Hillary at the time. 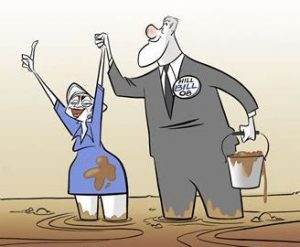 Fast forward 20 years: The Democrats came after then-President Trump with a vengeance after he won the presidency, using Hillary Clinton’s campaign staff to initiate the infamous Russian hoax that plagued Trump his entire term. With Hillary looking for dirt on Trump during the election season, she worked with Fusion GPS and Christopher Steele, a former British spy who compiled so-called intelligence briefs into what is known as the Steele Dossier. Remember all the news media and television anchors opining on the newly elected President of the United States and even our old CIA director and many of these pundits being hired by MSNBC only to have known that it was a big lie, trying to implicate Trump through his so-called knowledge of a back-door server at Trump Tower that was somehow used in collusion with Russian operatives working under Russian President Vladimir Putin in Moscow? As it turned out, it originated with Hillary Clinton, and snowballed into the most comprehensive hoax ever perpetrated on a sitting politician in U.S. history.

Well, Hillary Clinton’s manager said today that it was “OK” to leak to a reporter about the alleged server hoax because it helped the public sour against President Trump and prevented him from achieving many of his goals he had set out to accomplish. But the Durham investigation, now culminating with the first prosecution of a witness in Clinton’s orbit, is putting out the truth of the whole operation. We’ll have more as the trial progresses, but this just goes to show that the Clintons are, arguably, the most corrupt couple in the history of American politics, and the sooner we can wipe the slate clean of these individuals who have sullied both the honorable Democratic Party and the American people, the beter.