President Joseph Biden again has selected another winner to fill the Homeland Security position. Secretary Alejandro Mayorkas talked about an event which never happened on CNN. You may recall awhile back when the Border Patrol called in fellow agents who rode horses because they were overwhelmed at the border. These horseback agents, who are fully trained in equestrian police tactics, were efficiently controlling illegal aliens at the border. These agents never touched any of the terrorists who were trying to invade the United States in street clothes, breaking into the United States border from many different countries. During the process of controlling the individuals, videos footage made it appear that the agents were whipping the illegal aliens with the reins of the horse, when they were actually using the reins to control the movements of the horses. Originally, Mayorkas recounted that what he saw was horrible, and vowed that the agents would be held responsible for whipping the illegal aliens. But after a proper investigation by the Department of Justice’s field agents, the Attorney General acquitted these agents of any wrongdoing. 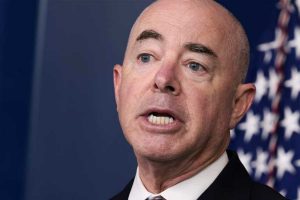 However, Congressmember Maxine Waters said what she had witnessed was worse than slavery! Convicting agents before a trial is ok for Maxine Waters. Ms. Waters, they were not convicted because they followed their own protocols (of which part of their actions were done to PREVENT injury to the illegal aliens who were threatening the horses), but you, Ms. Waters, should be removed from office as you were trying to start a riot. Along with President Biden who said something to the effect they will be held to their crime. If anything he should resign his office along with vice president Harris who also entered into the fray.

And so we have today, the men have been demoted because of the LIES that people like Waters, Biden, and other Democratic members have opined, even after a proper investigation! We live in a frighteningly dystopian world where now when you don’t do anything wrong, and in fact have evidence to prove it, if someone THINKS that they saw you APPEARING to commit violations, then that’s as damning as actually committing the violations themselves. Not good.