Remember when President Donald Trump slipped while walking down a steep, slippery walkway with no handrails before addressing a West Point graduation class? Well, every news agency bashed him and asked stupid questions and made fun of him. Even though President Donald Trump walked very slowly to try to avoid falling, all the press could do was to spend the entire segment highlighting his slip without any commentary on his actual speech or the actual class of magnificent young men and women, newly commissioned as second lieutenants in the United States Army. There were calls for him to resign because he couldn’t handle “simple walking.”

Next, remember back a few months ago when President Biden walked up the flight of stairs leading to Air Force One and fell not once, not twice, but three times. Instead of piling onto Biden like they did Trump, they criticized people who even mentioned Biden’s travails with the staircase. This was not just a normal person having mobility problems; Biden truly has medical problems that need to be addressed without the weight of the free world depending on his very existence. 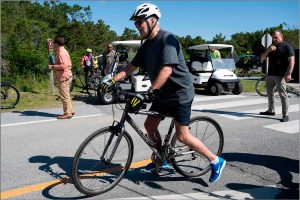 Now this weekend their were reporters who actually showed pictures of President Biden riding a bike with a mask on and they talked about it like that footage was this weekend well it wasn’t because President Biden this weekend was wearing a black and white helmet without a mask and when he was stopping he fell to his right side. In those pictures was one of the few times where Biden was generally cognizant and in control of his physical coordination. Why did they show those pictures? Simple. They wanted to show the people that Biden simply had a bicycle mishap when he stopped, and fell from a bicycle, while standing. Ostensibly he had his foot stuck in the pedal strap, but footage obviously shows that Biden was distracted by someone in the crowd of supporters (the Secret Service would never allow a crowd unfavorable to him within a short distance), and wasn’t concentrating on controlling his stance over the bicycle. And more importantly, he was in a completely different outfit than what the networks are showing. This is not just President Biden’s mistake, but the willful suppression of the president’s actual condition to the American people..

Nobody should want to see harm come to our President, and it is absolutely horrendous that people should laugh at him as they did Trump when he slipped off a ramp at West Point (he even predicted it because he noticed it before attempting to descend without slipping). But report what happened honestly and transparently. Don’t sugarcoat him; he IS the leader of the free world and ostensibly should be able to take the criticism and concern for his health without trying to gaslight the public. It is time for people to understand the consequences for hiding the truth, especially truth that can easily be shown in 4K clarity.