Pro Abortion protesters are demonstrating outside the Supreme Court justices homes. The problem now is the Democratic Party is shown to be very mean-spirited and this is a dangerous mistake. Specifically, let’s take a look at one of the federal laws being violated:

Now, THIS is actually one of the few times that protesting is illegal that would otherwise be legal under our first amendment laws. But the reason that judges are off limits are because they are supposed to be applying the Constitution to their rulings with no outside influence.

But I doubt anything will come of this protesting and this illegal influence. It is hopeful that the justices all maintain their dignity and don’t let the mob rule affect any of their decisions. If this happens, then this country is no longer a Constitutional Republican, and will barely hold on as a Democracy for not much longer. 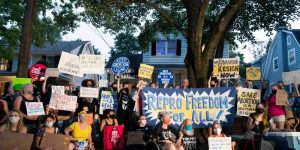